Global statistics show that people are more concerned about the impact of food on their health and well-being. We can also notice a growing interest in the environmental impact of everyday actions such as drinking a cup of coffee, driving a car/airplane, buying animal food or processed or highly processed foods, etc.

These concerns are indeed justified because our consumption of resources exceeds the Earth’s regenerative capacity by 1.75 times(1 – 2). It is said that humanity consumes 1.75 planets Earth . Scientific reports also show an alarming decrease in biodiversity. World populations of mammals, birds, fish, reptiles and amphibians have decreased by an average of 68% in just 50 years(3).

On the legislative level, we see in several countries the implementation of laws, directives and action plans that are in line with the environmental and social objectives of the United Nations. This is the case, for example, of the State of Vaud, Switzerland, with a climate plan that focuses on 3 main axes: reducing GHG emissions to achieve a 50-60% reduction by 2030; adapting to climate change; documenting climate change and the actions taken. One of the State of Vaud’s areas of action in relation to food is agriculture (11% of GHG emissions in Vaud). In particular, the State of Vaud aims to promote “sustainable and resilient agriculture, based on the sequestration of organic carbon in the soil and the preservation of its long-term health, the development of feed supplement techniques that inhibit GHG emissions from livestock, the development of biogas and the adaptation of agriculture to climate change in order to guarantee food self-sufficiency (the average rate between 2007-2017 in Switzerland is 60%)”. The State of Vaud is also positioning itself as a responsible partner by providing municipalities and organizations with subsidies for projects related to the reduction of GHG emissions and sustainable development. (4)

The objective of this article is to show some trends in terms of diet, diets and lifestyles. 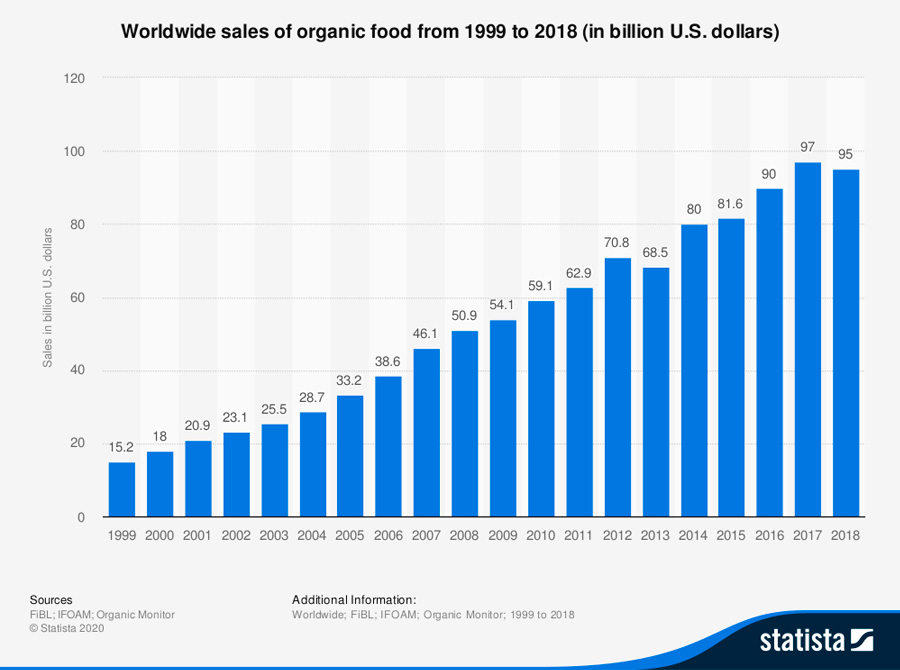 In Switzerland, the share of household expenditure on organic food and beverages doubled between 2000 and 2017, from about 5 to 10%(7). 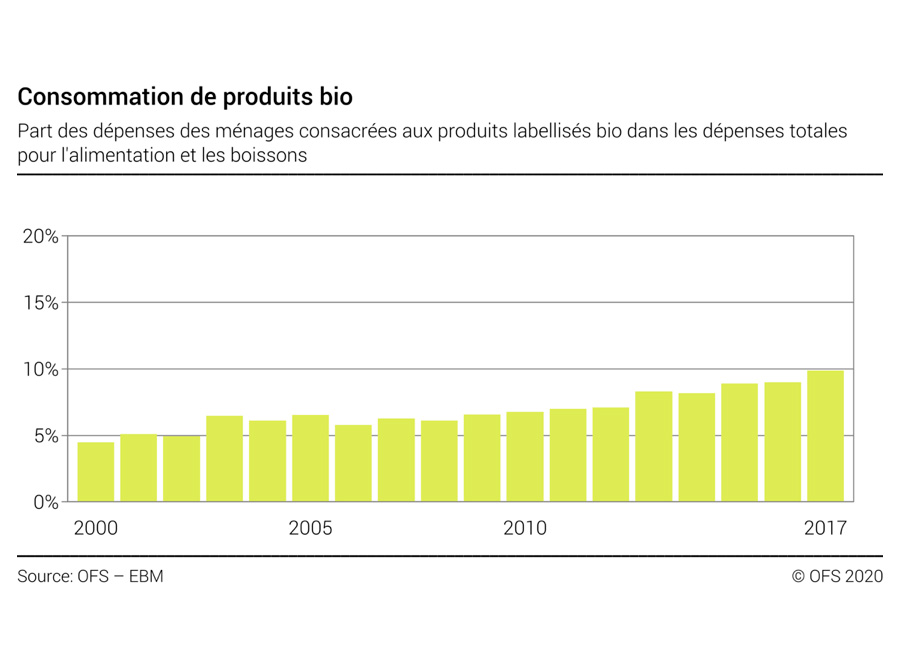 Consumption of organic products in Switzerland between 2000 and 2017(7)

Consumer interest in certified food products is also increasing. Studies show that sustainability is becoming a selection criterion when choosing a product. Criteria such as the non-use of pesticides, the quantity of packaging or its recyclability, working conditions, are among the most recurrent selection criteria, among others(8 – 9). 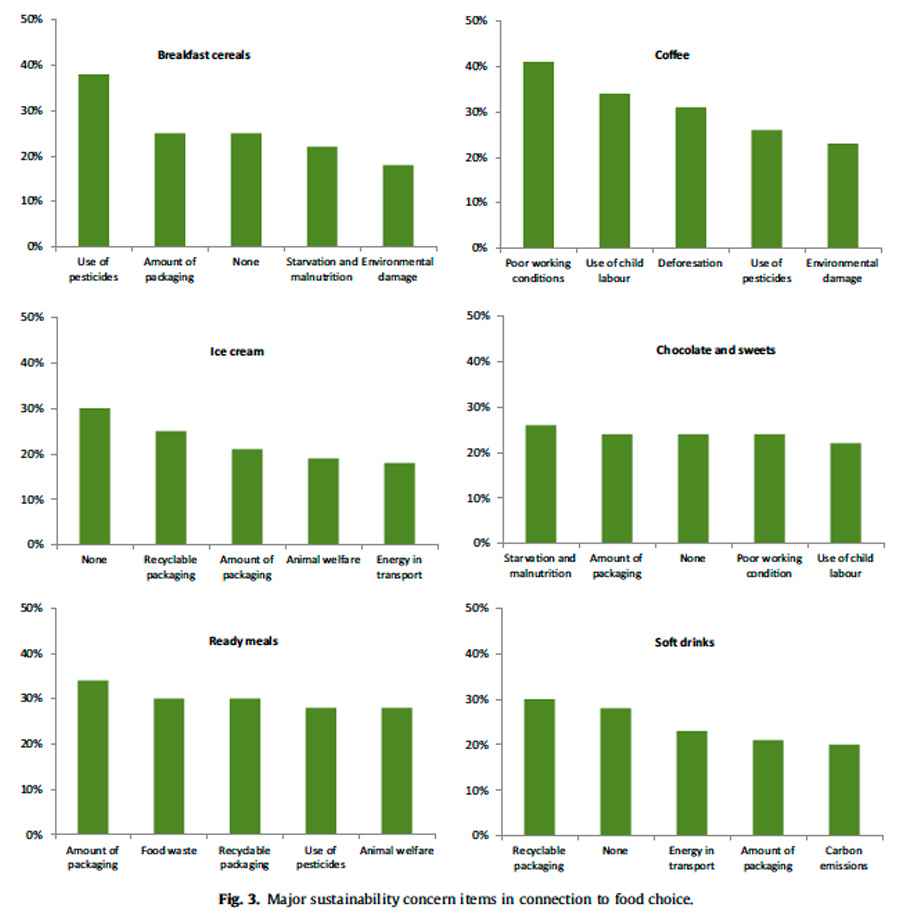 According to the National Restaurant Association, other trends are also to be noted, such as the consumption of local products (hyper-local sourcing) and unprocessed or minimally processed food products (10). Locavorism is particularly favored nowadays by the pandemic situation due to COVID-19. This movement advocates the consumption of food produced within a limited radius around one’s home (11).

One of the main emerging trends in diets is the vegetalization of the diet. Four types of diets in this direction stand out in a study conducted in 4 European countries (France, Germany, the United Kingdom and Spain): the vegetarian diet, the vegetalian diet, the vegan diet and the flexitarian diet (below the definitions). Among these 4 diets, the most important one is flexitarianism, i.e., voluntarily limiting meat consumption without being exclusively vegetarian. This trend would mainly concern the 18-34 age group. (12).

Rates of vegetarians, vegetalians, vegans and flexitarians in France, Germany, Spain and the United Kingdom in 2018 (12)

Even if the progression of this trend is difficult to measure at the European and global level, the popularization, the values of the younger generations and the awareness of the state of the environment, suggest the progression of vegetarianism.

Diet and eating habits change over time and are influenced by many social and economic factors. Nowadays, we can notice an awareness of the benefits of a healthy diet on people’s health. According to the WHO, a healthy diet is a diversified and balanced diet adapted to age, gender, lifestyle and physical exercise (14).

In Switzerland, a survey conducted in 2009 showed that “taste, quality and health, followed by diversity, balance and freshness” are priority factors for the population in terms of nutrition (15). According to a more recent survey, conducted by menuCH between 2014 and 2015, three out of four people have heard of the Swiss food pyramid and two thirds of people were aware of the “five a day” campaign (16).

Various entities and organizations also advocate for a healthy diet with a low environmental impact (17), the so-called planetary diet, i.e. a diet that is optimal from a health and ecological point of view (18). 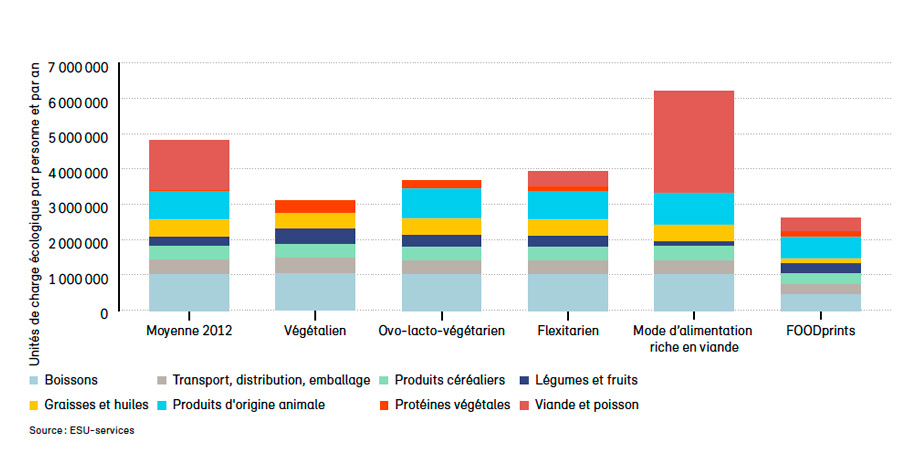 Influence of power supply modes on the environment (18)

In terms of food, the challenge lies, as shown in the figure below, in the abandonment of synthetic pesticides and fertilizers, the extension of agro-ecological infrastructures, the generalization of healthier diets, less rich in animal products and making more room for fruits and vegetables (19 – 20). The trend is already there both in terms of practices and legal framework. There is every reason to believe that this trend will only increase. 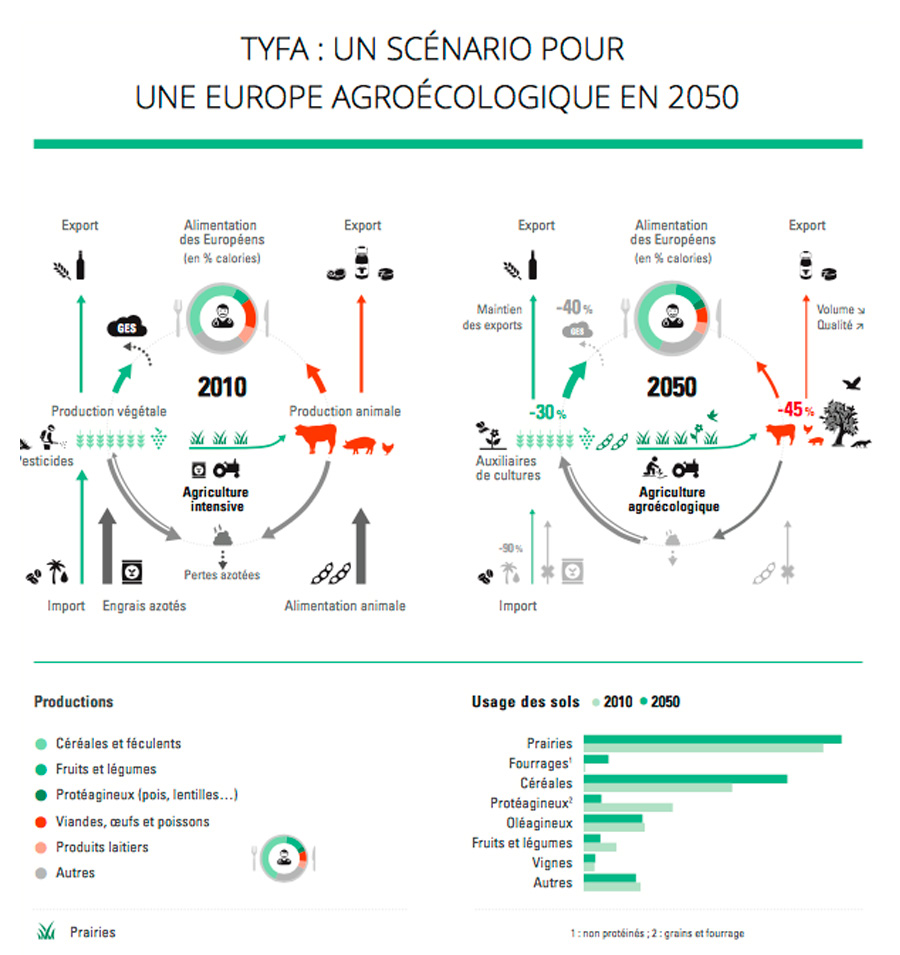 In order to guarantee the sustainability of the different economic sectors, it is obvious today that these sectors must place more emphasis on planning and integrated management of development strategies with a positive social and environmental impact. This is all the more so in developing countries where consumers are acquiring greater purchasing power. 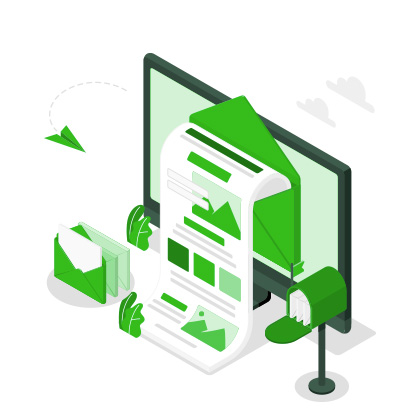